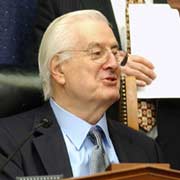 LifeNews.com Note: Laura Echevarria is a LifeNews.com opinion columnist. She is the former Director of Media Relations and a spokesperson for the National Right to Life Committee and has been a radio announcer, freelance writer active in local politics.

In 1996, Congressman Henry Hyde stood up before his colleagues to argue in favor of overriding President Bill Clinton’s veto of the Partial-Birth Abortion Ban Act. Congressman Hyde’s skill as an orator rivaled the skills of any marksman or swordsman.

His words and eloquence were reminiscent of another era of ideals and determination– his speeches read like those of our founding fathers. They are elegant even when the subject is the heinousness of abortion.

His words challenged us and demanded of us no less than our best—our best efforts, our best values, our best sense of duty.

By upholding this tragic veto, those colleagues join the network of complicity in supporting what is essentially a crime against humanity, for that little, almost born infant struggling to live is a member of the human family, and partial-birth abortion is a lethal assault against the very idea of human rights and destroys, along with a defenseless little baby, the moral foundation of our democracy because democracy is not, after all, a mere process. It assigns fundamental rights and values to each human being, the first of which is the inalienable right to life.

One of the great errors of modern politics is our foolish attempt to separate our private consciences from our public acts, and it cannot be done. At the end of the 20th century, is the crowning achievement of our democracy to treat the weak, the powerless, the unwanted as things? To be disposed of? If so, we have not elevated justice; we have disgraced it.

This is not a debate about sectarian religious doctrine or about policy options. This is a debate about our understanding of human dignity, what does it mean to be human? Our moment in history is marked by a mortal conflict between a culture of death and a culture of life, and today, here and now, we must choose sides.

I am not the least embarrassed to say that I believe one day each of us will be called upon to render an account for what we have done, and maybe more importantly, what we fail to do in our lifetime, and while I believe in a merciful God, I believe in a just God, and I would be terrified at the thought of having to explain at the final judgment why I stood unmoved while Herod’s slaughter of the innocents was being reenacted here in my own country.

This debate has been about an unspeakable horror. . . .We are not talking about abstractions here. We are talking about life and death at their most elemental, and we ought to face the truth of what we oppose or support stripped of all euphemisms, and the queen of all euphemisms is "choice" as though one is choosing vanilla and chocolate instead of a dead baby or a live baby. . .. Let the innocence of the unborn have the last word in this debate. Let their innocence appeal to what President Lincoln called the better angels of our nature. . . . Make it clear once again there is justice for all, even for the tiniest, most defenseless in this, our land.

Congressman Hyde’s most well-known quote, and probably the most beloved by pro-lifers, is very appropriate in light of his passing:

When the time comes as it surely will, when we face that awesome moment, the final judgment, I’ve often thought, as Fulton Sheen wrote, that it is a terrible moment of loneliness. You have no advocates, you are there alone standing before God – and a terror will rip through your soul like nothing you can imagine. But I really think that those in the pro-life movement will not be alone. I think there will be a chorus of voices that have never been heard in this world but are heard beautifully and clearly in the next world – and they will plead for everyone who has been in this movement. They will say to God, ‘Spare him because he loved us,’ – and God will look at you and say not, ‘Did you succeed?’ but ‘Did you try?’

I’m quite sure Mr. Hyde is in the presence not only of the Almighty but also that chorus of little ones. He can say with certainty that he did indeed try—may he rest in peace.